©
This plan was created by another user. Make it your plan
Edit start date
Want to change plan duration?

©
Geelong is a port city located on Corio Bay and the Barwon River, in the state of Victoria, Australia, 75km south-west of the state capital, Melbourne. On the 31st (Mon), kick back and relax at Bells Beach and then explore and take pictures at The Great Ocean Road. Get ready for a full day of sightseeing on the next day: tour the pleasant surroundings at 13th Beach, then stroll through Eastern Beach Reserve, and then take in nature's colorful creations at Geelong Botanical Gardens.

To see ratings, photos, other places to visit, and other tourist information, refer to the Geelong online tour planner .

Zurich, Switzerland to Geelong is an approximately 29-hour flight. Due to the time zone difference, you'll lose 9 hours traveling from Zurich to Geelong. Traveling from Zurich in December, expect Geelong to be much hotter, temps between 29°C and 13°C. Finish your sightseeing early on the 1st (Tue) so you can drive to Apollo Bay.
more less

Things to do in Geelong

Traveling by car from Geelong to Apollo Bay takes 2 hours. Alternatively, you can take a bus. Wrap up your sightseeing on the 3rd (Thu) early enough to drive to Port Campbell.
more less

Things to do in Apollo Bay 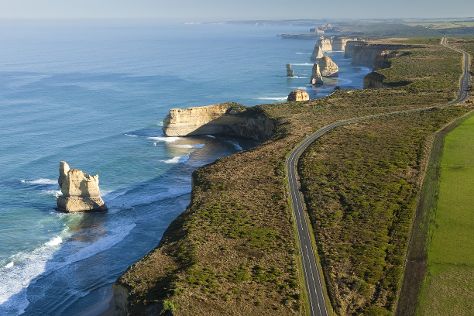 ©
Port Campbell is a coastal town in Victoria, Australia. Step out of the city life by going to Apostle Whey Cheese and Loch Ard Gorge. Explore Port Campbell's surroundings by going to Warrnambool (Tower Hill Wildlife Reserve & Flagstaff Hill Maritime Village). Spend the 4th (Fri) exploring nature at Port Campbell National Park. And it doesn't end there: don't miss a visit to Gibsons Steps, take in the dramatic natural features at London Bridge, and explore the activities along Bay of Islands.

To see maps, where to stay, and tourist information, use the Port Campbell holiday planner .

Drive from Apollo Bay to Port Campbell in 2 hours. Alternatively, you can take a bus. Cap off your sightseeing on the 6th (Sun) early enough to go by car to Halls Gap.
more less

Things to do in Port Campbell

Warrnambool
Find places to stay Jan 3 — 6:
Hotels on TripAdvisor
Homes on Airbnb
Highlights from your plan

Halls Gap serves as a home base for visiting Grampians National Park.

Step out of the city life by going to Grampians National Park and Chatauqua Peak. Eschew the tourist crowds and head to Grampians Estate, Great Western Wine Centre and Ararat Regional Art Gallery. Step out of Halls Gap with an excursion to Grampians Estate Cellar Door in Great Western--about 34 minutes away. There's still lots to do: hike along The Pinnacle, admire nature's wide array of creatures at Halls Gap Zoo, take in the dramatic scenery at Burrong Falls, and learn about winemaking at Pomonal Estate.

To find maps, photos, where to stay, and tourist information, use the Halls Gap trip planning site .

Getting from Port Campbell to Halls Gap by car takes about 3 hours. Other options: take a bus. Cap off your sightseeing on the 9th (Wed) early enough to travel back home.
more less

Things to do in Halls Gap